An animal with a glue lasso
Description:
Onycophora are a whole phylum of animals related to Arthropods and water bears. They are commonly referred to as velvet worms. 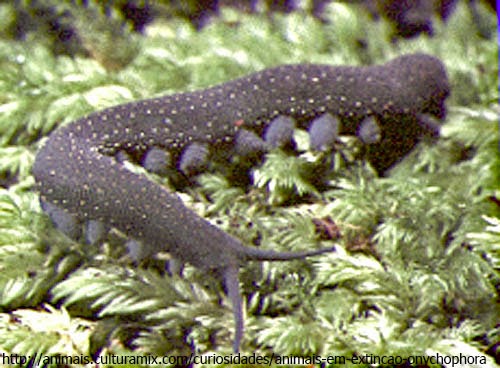 Their bodies are made up of many undifferentiated segments with a pair of legs on each, similar to centipedes. Biologists believe that this is the primitive body plant for the Arthropods and water bears as well. They are nocturnal and don't see very well but are voracious predators. They hunt mostly by feeling about the undergrowth with their antennae. If you are a small animal and they touch you once,watch out. They spray a alimy string of  glue like proteins which quickly harden when it makes contact with the prey item. This is similar to silk produced by spiders and other Arthropods, but it is less structured giving it a liquid quality but is strongly adhesive. The strings are shot out in coordinated loops which lasso the prey and stick them to anything they touch. The more they struggle the more immobile they become.  Onycophorans will inject digestive fluids into their prey and drink the partially digested remains, much like a spider.

This GIF was copies from http://giphy.com/gifs/slime-gy9IT4SniJFFm

Some species of velvet worms are social with a female dominant strongly hierarchical social structure. These species commonly hunt in packs and the alpha female will feed first. Most velvet worm females can clone themselves through parthenogenisis,  and in some species males may be extinct.

Check out this video. It's in Spanish, but if you don't understand it you can probably figure out what he is saying anyway.