The biggest insect in the world*

I'm getting a growing number of hits from New Zealand, and given the variety of weird taxa from their insane archipelago I realize that I may be amiss to have not included any of them yet, so for all you kiwis out there. (I'm not talking about the bird or the fruit) today's creature is Deinacrida heteracantha, commonly known as the Little Barrier Island giant weta.

Description:
There are several species which are called weta in New Zealand which do not form a natural group, see the classification section for detail. In any case New Zealand certainly has the largest members of the group. This particularly species was chosen as it is the largest species and indeed is the largest insect in the world by weight (not by length). There are some claims that certain goliath beetles can weigh more, but as far as I can tell these have not been substantiated. So congratulations guys, you win this one, but Vegemite is still Australian. 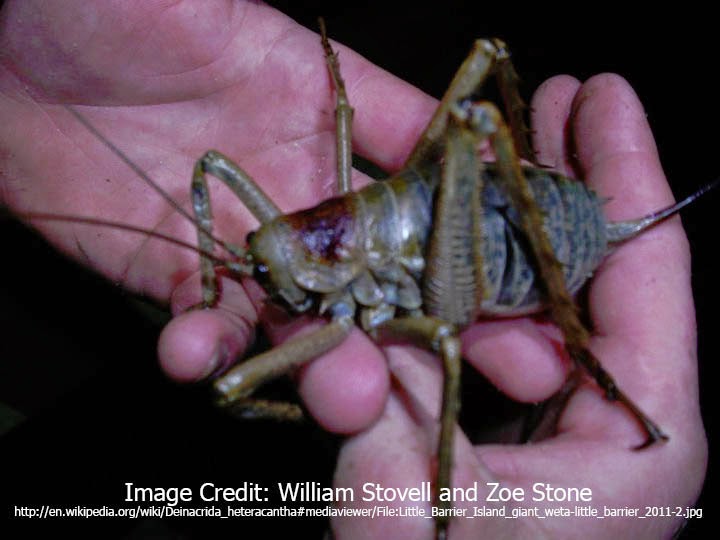 New Zealanders tell me that some species of weta have a habit of giving people a shock by hiding in the toilets. They also reportedly have a nasty bite. I can imagine those two facts together conspiring into something rather unpleasant.
Video Disclaimer: This is not the endangered Little Barrier Island giant weta, but a different species I can't tell which but presumably it is a plentiful species and not and endangered one. These giants of the insect world are fairly omnivorous and will eat fruit, roots, vegetation or other insects.

Distribution:
Despite its name the Little Barrier Island giant weta is not restricted to Little Barrier Island but is found on a few islands in the north of New Zealand, although some of these are reintoductions. The species did once have a much larger range which at least included the North Island of New Zealand but its range and numbers have been diminished since the introduction of several pest species into New Zealand.

Classification:
The name weta can be confusing because it often referred to members of either the family Anostostomatidae or Raphidophoridae. To say that wetas only exist in New Zealand is a tautology because the term is a Maori name for several species which do not form a monophyletic group. There are members of the family Anostostomatidae in Australia and South Africa, which are not called wetas because they have not been named such by the Maori. The group diverged from its closest relatives a very long time and are an example of a relict gondwanan taxon. Deinacrida is the only member of its genus.