Does this mind altering parasite control the internet?
Description:
Toxoplasma gondii is a single celled eukaryote which is an obligate parasite on vertebrates, particularly mammals. It is always capable of asexual reproduction but is only capable of sexual reproduction when it is infecting feline species. Cats are obviously it's preferred host, so it has come up with a pretty cool trick to make their way into cat hosts if they find themselves to be infecting rodents. Rodents naturally have a rather sensible fear of the smell of felines. A minor adjustment of the rodents brain chemistry by these parasites change that fear into an attraction. You can imagine how long a rat would last if it was attracted to the scent of a cat. Among other methods the parasite is transmissible by the consumption of raw meat. 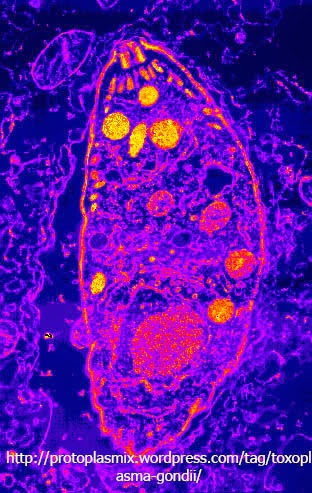 Given that all mammal brains are variations upon the same theme you're probably wondering of your pet could be infected with this mind altering parasite, whether it could infect you and whether it can have an influence on your mind. The answers are yes, yes and yes. A 2009 study estimated that up to a third of the human population are carriers of Toxoplasma gondii. In healthy individual It can cause mild cold-like symptoms for the first few weeks after infection and will normal form cysts in the muscle tissue and remain latent. In immunocompromised individuals such as those suffering from AIDS, the very young or the very old it can develop into more severe symptoms and is known as toxoplasmosis. It can be transmitted from a mother to her child before birth and has been associated with miscarriages in humans. 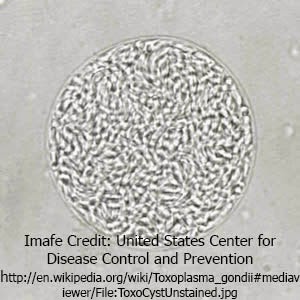 The parasite can infect the human brain and once it is there it excretes a  neurotransmitter called gamma-Aminobutyric acid which reduces the excitability of neurons. This neurotransmitter relaxes and reduces anxiety in humans. Given our evolutionary association with large feline predators the question should be asked as to weather it is doing the same thing to us as it does to the rodents. There is no evidence to suggest that they make humans more attracted to cats but have you seen how many cat pictures there are on the internet? Try explaining that logically. Also check out this xkcd comic: http://xkcd.com/231/. We've all seen people who behave like that around cats, doesn't that just say mind control parasite to you? There has been some unconfirmed association between Toxoplasma gondii and schizophrenia.

Distribution:
Toxoplasma gondii is found in hosts in all terrestrial environments.