This insect is invisible (if you're a termite)

Description:
These are highly modified true bugs (Heteroptera). Their body is lined on the edges with a gently sloping hard but very flexible laminate fringe and the only body part which ever protruded from underneath is the antennae, which can be retracted underneath the body. Many of their body parts are greatly reduced and their wings, eyes and ovipositor are entirely absent. They are almost like a heteropteran family stripped down to the bare essentials. 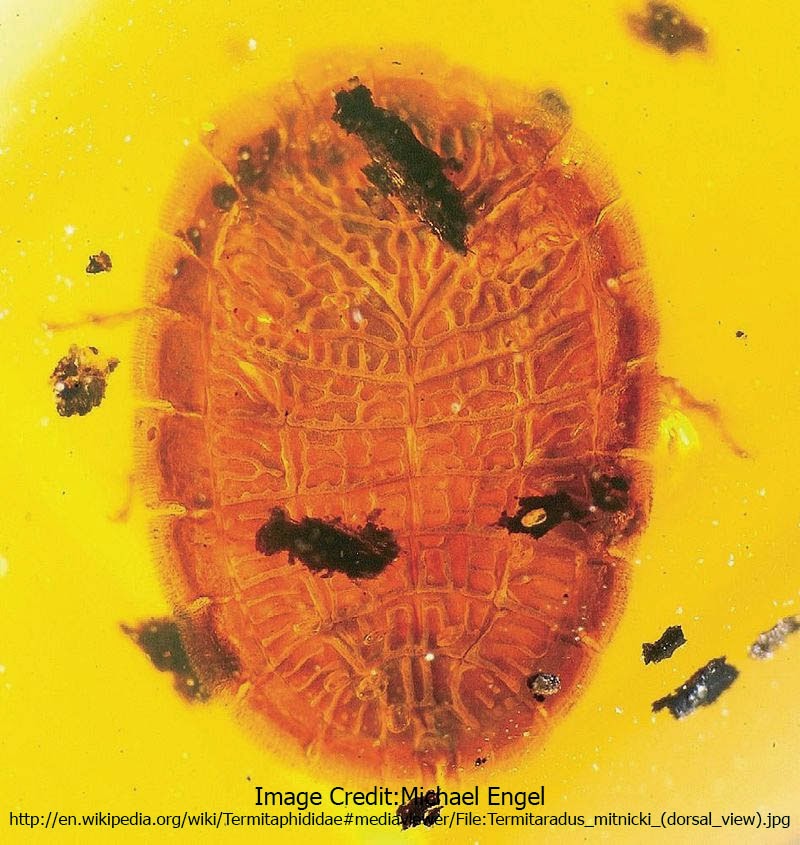 They make look pretty much like an orange blob, and if you look carefully you can just make out which end the head is, but they have invaded one of the most hostile environments on Earth. Termite mounds. Termites are ferociously territorial and will enthusiastically rip into anything that invades their nest no matter how big it is. They excrete some nasty toxins and even have specialized casts for fighting off invaders. If you don't believe me, try putting your hand in there. These bugs have evolved the ability to pass through a termite mound undetected by the termites. Termites literally walk right over these guys without noticing, although the Termatiphidids well tuck their antennae under their body while this is happening. They even lay their eggs among the termite mound. When they are exposed to air they move surprisingly quickly, with one account stating that they move almost as quickly as the agitated termites themselves.

Little is known about these unusual bugs, including what they eat. They may prey on termites or scavenge off their food. Termatiphididae have never been seen outside termite mounds, but presumable they have some method of colonizing new mounds. Given their lack of eyes and the ability for most Pentatomomorpha to produce scent we assume that their lifestyle is very scent oriented and presumable they use pheromones as part of their trick to hide themselves from the termites. They also have some highly modified setae on their back which are probably useful for feeling their way around narrow termite tunnels.

Distribution:
Termatiphididae have a Pantropical distribution (they are found in all the tropical regions of the world).

Classification:
Termatiphididae are the sister-group to the Aradidae, the bark dwelling bugs which will be discussed on this blog later. Grimaldi and Engel 2008 proposed that they may be included in the Aradidae. The termatiphididae and the Aradidae together form the superfamily Aradoididae, which is the basal group in the Pentatomomorpha one of the major radiations of the true bugs. The idea that Piematidae may be in the Aradoididae (Grimaldi and Engel 2007) has been refuted by Cassis and Schuh 2009. The age of their relationship with the rest of the Pentatomorpha has not been studied, but I can from a few fossil Pentatomomorpha I know, I would be surprised if it did not go back into the early Cretaceous.