The vampire squid from hell.

Description:
Vampyroteuthis infernalis may sound like a scary name, because it is supposed to be. The generic name is a combination of the word Vampire and Teuthis (Greek for squid). The specific epithet infernalis can mean hell in Latin. The common name for this beast is the Vampire squid. It is not an enormously large squid, achieving lengths of up to 30 cm long, but this animals most sticking feature is the webbing between its tentacles. Like vampires they are afraid of sunlight and forcing them to live at ocean depths to which the light cannot reach. Like many other squid they can change the color of their skin, although they have a very limited range, between light red and dark reddish black. Their eyes usually appear reddish. Their tentacles carry multiple fang like barbs which are used for capturing their prey and at the base of the mantle they have a powerful beak. Their barbs, coloration and cape like webbing between their tentacles do give them an unusual vampiric appearance. 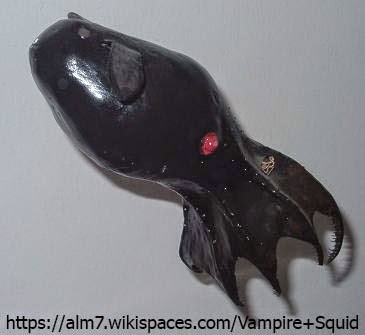 They propel themselves with the two fins attached to their mantle. Their skin is covered in light producing cells which are used to confuse and disorient other animals at the depths of the ocean. This is probably used mostly against predators. Not much is known about their diet but we don't think they suck blood. 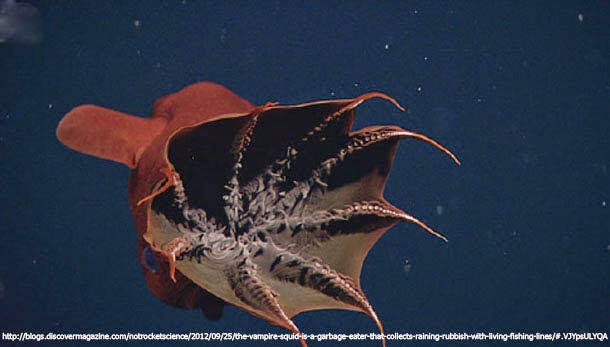 Distribution:
Vampire squids live at depths of 600- 1500m under the surface of the ocean and they prefer warmer waters.