This insect is longer than your forearm
We've had the heaviest insect in the world, now we will take a look at the longest. Phobaeticus chani is commonly known as Chan's megastick. I know what some of you are thinking and that's not very original, every undergraduate who has ever heard of Chan's megastick thought the same thing. It is named after a Malaysian biologist Datuk Chan Chew Lun who recorded the first specimen which was given to him by a local villager.

Description:
The largest specimen ever found measures 35.7 cm (legs are excluded). With the legs outstretched it measures 56.7 cm. Despite its size it wasn't collected until 1989. It was described in 2008 and only 6 specimens are known. This could be for a number of reasons: it has been speculated that they live in the rainforest canopy which is the great unknown in terrestrial insect diversity due to the difficulty of collecting at these locations. It is also possible that they are just very rare and there has not been much interest in collecting them for scientific purposes. Coincidence is not a ridiculous explanation, as the Island of Borneo is the third largest in the world and it possess enormous insect diversity of which we can't even say we know the tip of the iceberg. 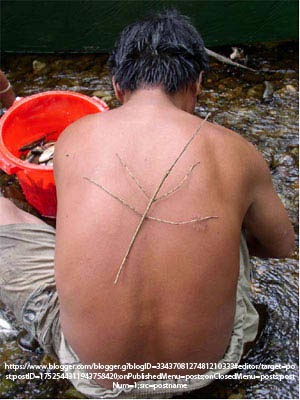 The egg of Chan's megastick is a very unusual shape for any insect. It has a narrow laminate protrusion that could act as wings and in many ways it resembles a plants seed. This is believed to aid in the dispersal of the seed due to the habit of some stick insects to lay a single egg at a time and toss them. If they are indeed canopy insects they could potentially disperse their eggs very far.

Distribution:
Chan's Megastick is known only from the jungles of Northern Borneo in Sabah province, Malaysia.