A shape shifting monster in your garden.

Fuligo septica may sound like a fairly disgusting name for a species, but its common name, the Dog vomit slime mould sounds even worse. They may look quite disgusting,  but they are actually very cool creatures.

The slime moulds have several phases to its life cycle. It life cycle starts off as an single cellular organism much like an amoeba. They reproduce asexually for a while while mostly eating bacteria. When conditions are right these amoeboid can breed with each other. The result of this breeding is a multi nuclear blob without any cellular division which can either be thought of as a single cell with multiple nuclei or multiple cells with a fused cytoplasm. This monstrosity can grow meters in size as it consumes micro-organisms in its path. The freakiest thing about it is that it is capable of self movement. O.k. it is not very fast, sometimes it can achieve speeds of over 1 mm a second, but that's still pretty weird. 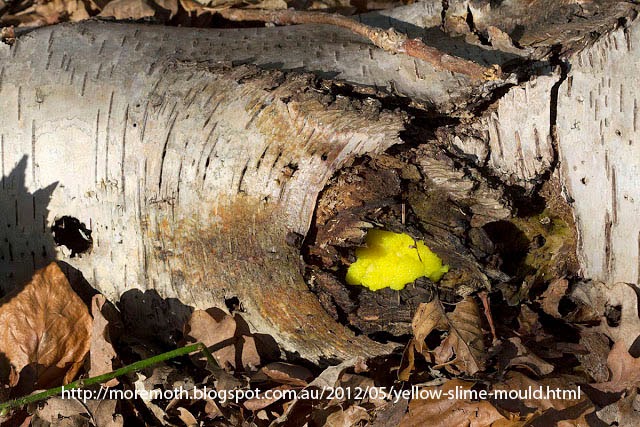 When the yellow blob has consumed all the food in the area it transforms. At this point the slime mould will form reproductive bodies which shoot out spores in order to colonise areas with more food. It is in this stage that the dog vomit slime mould is normally noticed as a bright yellow or greyish slimy blob. There are some really interesting fruiting bodies, some of which are mobile but we will talk about these in later posts. Dog vomit slime moulds are believed to use beetles to spread their spores. 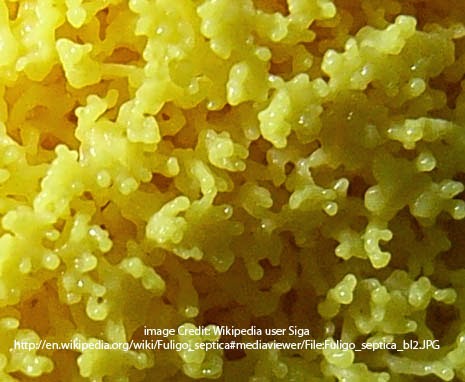 Like animals and unlike fungi slime moulds lack chitin in their cell walls making the shape of their cells less rigidly defined.

Dog vomit slime mould is found throughout the world and are particularly common in garden compost.

The slime moulds used to be considered to be a group of fungi, mostly because the fungi used to be classified by the absence of characteristics which is always a bad way to classify organisms. They are considered to be more closely related to Animals than fungi and are a member of the Amebozoa Kingdom.