A bug which poisons its prey' s drinks

In an earlier post I showed you Acanthaspis petax, a member of one of my favorite families, Reduviidae or the assassin bugs. Today I am showing you another ant assassin bug which is an ant specialist, Holoptilini.

Description:
Holoptilini are sometimes called feather legged assassin bugs due to the ridiculous looking feather like formation on their legs. 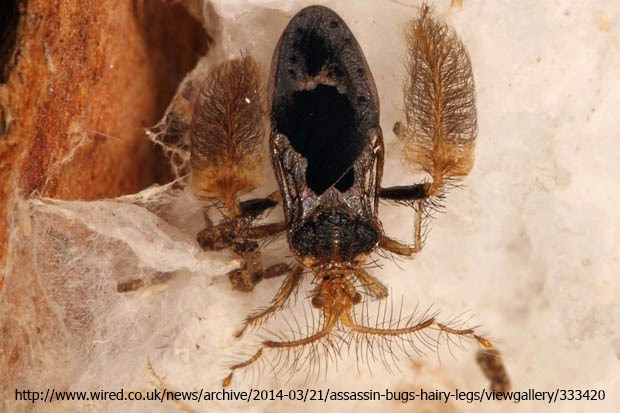 Despite their appearance they are savage ant predators and like many other assassin bugs they have a cool trick for trapping and killing their prey. Like many good assassins, the Holoptilini take advantage of the ants favorite drink. These Assassin bugs excrete a sugary substance to attract ants who come over for a quick feed, but the sugary secretion contains a paralytic toxin. The toxin acts fast ant the ant is rendered helpless as the assassin bug pierces the ant with its rostrum and sucks it dry.

Distribution:
Holoptilini are found in the Australian and the oriental regions.