The biggest flower in the world?

Description:
Amorphophallus titanum is commonly known as the titan arum or the Zamikand. It is a member of the genus Amorphophallus  Greek for shapeless phallus, a weird name for a plant most people would think, although flowers are plant reproductive organs so I guess it's not that weird. Anyway the specific epithet is more what you would expect from a plant with this kind of flower. They are huge:
In fact it is the largest flower in the world growing up to 3 m tall and sometimes weighing in excess of 75 kg. This title is somewhat debatable as the definition of a flower is not as obvious as it may seem. You may remember the post on Rafflesia arnoldii whose claim to fame is that it is the largest single flower in the world. The titan arum can be considered the largest flowering body in the world. Surprisingly enough this colossal flower grows out of subterranean tubas with a single leaf above ground much like an onion or potato.

Like Rafflesia arnoldii the Titan arum gives off a smell similar to that of a rotting corpse when it is in flower. This is to attract it's pollinators which are usually flesh eating beetles of flies. The plant can live up to 40 years old but it will only flower 4-6 times in its life. The enormous effort that goes into producing the flower must be difficult to maintain as the flowers only last 48 hours. 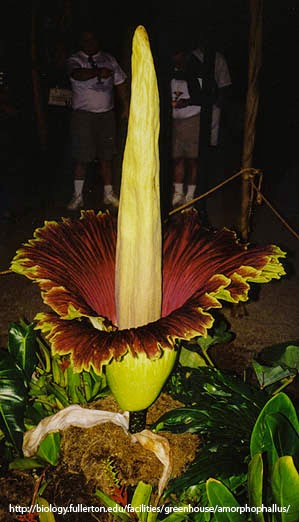 Distribution:
The titan arum is found on the Indonesian island of Sumatra.