You'll be glad they only suck your blood.

Cimex lectularius is a species of which bear the very common name of bed bugs. There are a lot of myths about these blood sucking pests but in this case the reality may be more bizarre than the fiction. 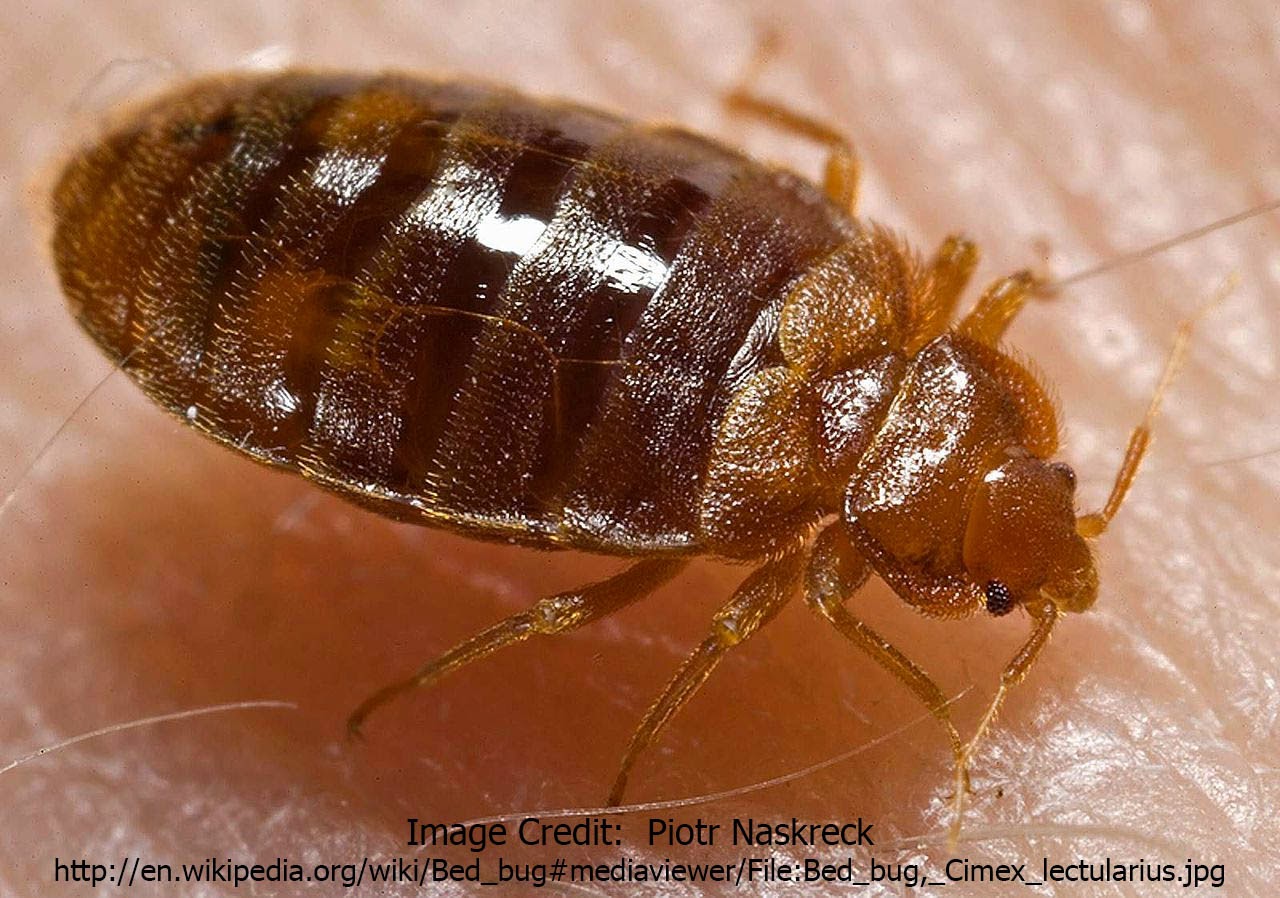 First of all bed bugs can't grow more than about half a centimeter long, you can see them but they are not the size of a large cockroach. If you think you have seen one that big it was probably a cockroach. They cannot transmit diseases as far as we can tell, and at this stage it has been looked into quite extensively. They are very hard to get rid of, but not impossible and old furniture or clothes do not need to be burnt. They are often hard to find as they can live in carpets, skirting boards, mattresses etc... but again it is not impossible. They do specialize in sucking human blood and they can be very hard to get rid of. They hide during the day usually inside the mattress or in nearby carpet, skirting boards etc.. They can tell you're around by the Carbon Dioxide you exhale and your body heat. Their eggs are very tough and hard to destroy which is why if the colony has been well established extermination has to be done thoroughly or the colony can reestablish itself in a few weeks. 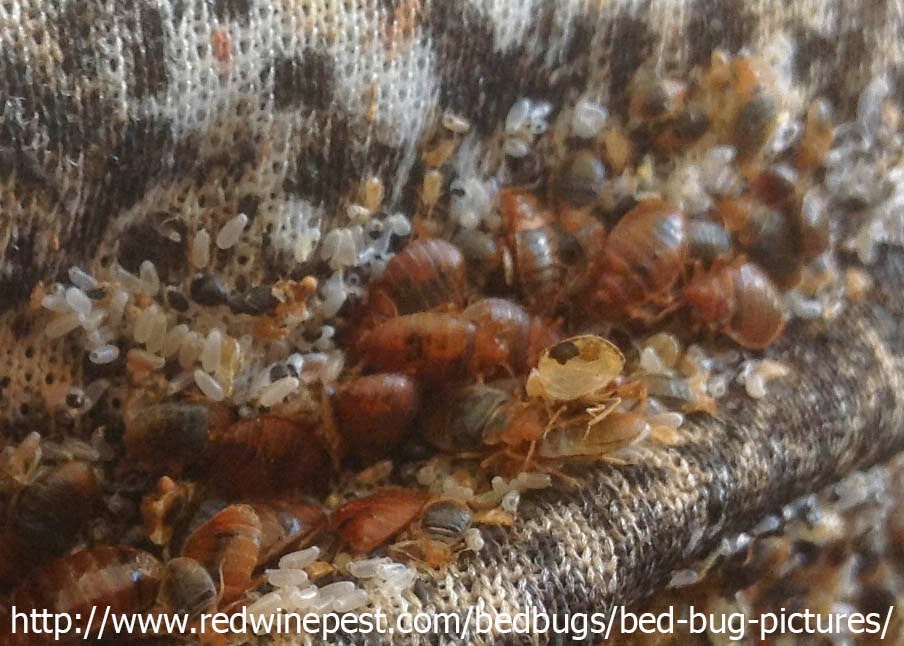 Cimex lectularius have a very strange method of reproduction.  Male bedbugs have their parameres modified onto a single fused hardened sharp needle like structure. This is used to puncture the female's abdomen and the sperm in injected into the females haemolymph (the insect equivalent of blood). The sperm will find it's way to the female's sperm storage organs to be used for fertilizing eggs later. This method of reproduction, known as traumatic insemination, occurs in several different true bug groups. In bedbugs the females have developed a secondary organ known as a mesospermalege which they direct the males to during mating. This reduces the damage done to them by the males. 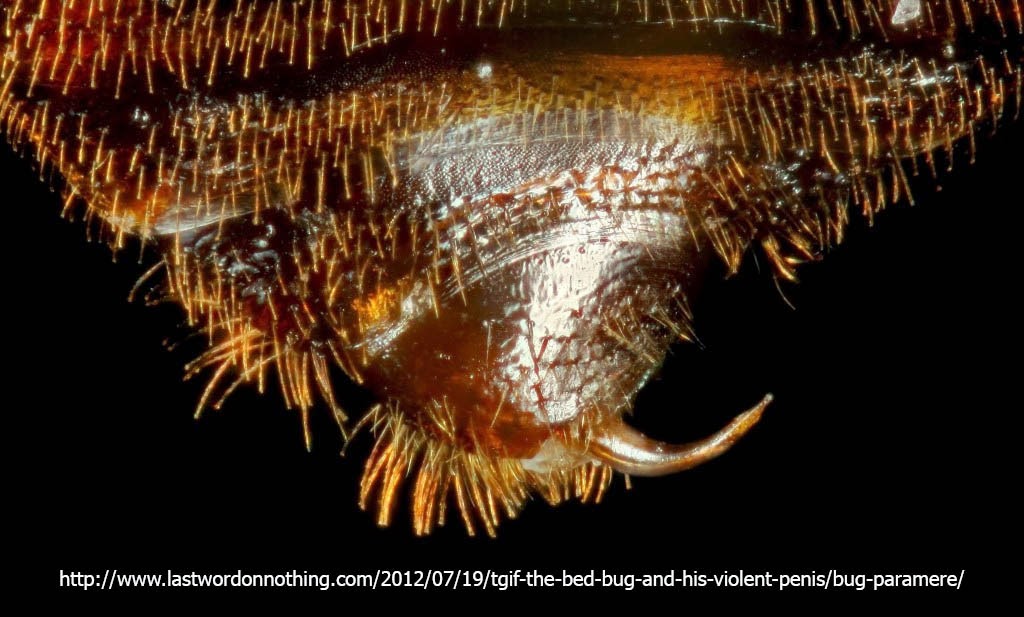 Bedbugs produce a pheromone when they are in danger which alerts other bedbugs to the fact that there may be a predator around. The males also use this pheromone to prevent other males from attempting to mate with them as they seem to have no other method for determining males from females. Like other true bugs they have long tubular piercing mouth parts for feeding as you can see in this assassin bug.

Distribution:
Bedbugs are found everywhere there are humans. They are believed to have coevolved with humans from the time when we mostly lived in caves. They probably were originally bat specialists like the rest of their genus but jumped hosts when humans began to inhabit the caves which the bats were living in. They are most likely from somewhere in the Middle East.

Classification:
The other members of the genus Cimex are called bat bugs and usually live among bat colonies. Some of these have been known to feed off human if they are hungry. Several other species in the family Cimicidae are sometimes referred to as a type of bedbug. I prefer to use this term only for the true bedbug Cimex lectularius as the rest don't form anything resembling a monophyletic group.