And you thought I had a big head.

You can't have a weird biology blog without chucking in a few of those ultra charismatic extinct dinosaurs every now and then. My list has over a dozen dinosaurs in it and come to think of it I have probably been remiss in not including any dinosaurs yet other than birds which are dinosaurs in the true sense of the word. See my page on Linnean Classification for an explanation of this if it makes no sense to you. So without further ado I give you a bizarre dinosaur.

Description:
Kosmoceratops richardsoni sometimes known by just the generic name Kosmoceratops is a bird hipped dinosaur related to the triceratops which had a particularly ornate skull. 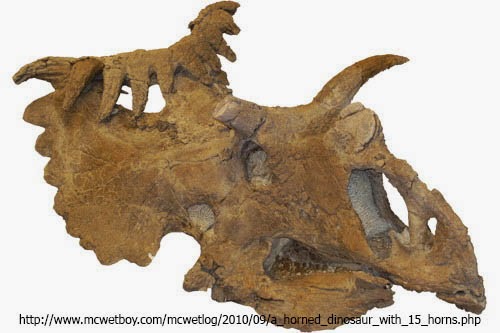 These highly decorated monsters grew up to 4.5 meters long with an enormous 2 meter long head. That's right it's heat was bigger than you. If you think the triceratops' three horns are impressive this guy has a total of 15. They had ten horns which made up the frill at the back of the head, two posterior to each eye and one in the middle near the nose. This amount of effort into horns probably means that their function was not just defensive but probably ornamental as well. They may well have been used to compete for females like in deers. 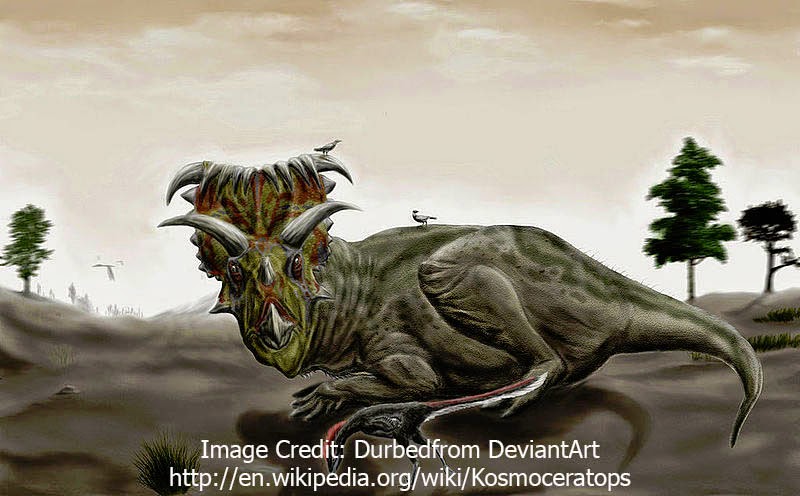 Distribution:
Kosmoceratops is known to have existed in the small island continent known as Laramidia which is now the western part of North America. They may have spread to what is now Eastern North America (Appalachia) when the two continents joined. They may be as old as 90 million years old and may have survived to the K-Pg extinction event 65 million years ago (or K-T if you prefer).

Classification:
It is worth pointing out that although this order of dinosaurs is referred to as the bird hipped dinosaurs, they do not contain the birds. The birds are in a group called the lizard hipped dinosaurs.  Go figure. The family Ceratopsidae contains the familiar triceratops along with many other similar looking dinosaurs.