Description:
In an earlier post I discussed the real life sea monster, the colossal squid. Another common feature of maritime legends is the giant sea serpent. If there is a living creature which fits the description of a giant sea serpent it is Regalecus glesne, the giant oarfish sometimes called the king of Herrings. 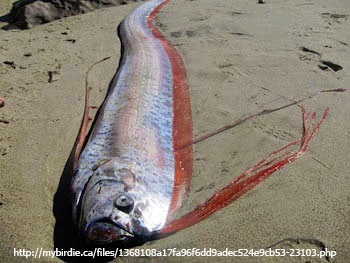 The giant oarfish is a long eel-shaped fish (but it is not an eel!). Its dorsal fin ectends along the entire length of the body. So how long can it get? Records are not common but the longest on record that can be confirmed was 11m in length making it the longest bony fish in the world (bony fish includes fish with calcified bone, it does not include distant groups such as sharks and rays). Unconfirmed accounts claim that they can grow up to 17 m in length.

Giant oarfish lack scales and their skin is apparently quite fragile and easy to damage. They may look like an evil sea monster, but their diet consists almost enitrely of plankton and they are quite harmless. Large specimens of giant oarfish which was up on beaches still give people quite a fright to this day and inevitably cause local controversy. Appearance of the oarfish is associated with earthquakes in Japanese culture, however I am always very skeptical of these stories.

Distribution:
Giant oarfish can be found in all the world's oceans and are believed to be migratory.  It is possible that they have been the inspiration for stories about giant sea serpents all over the world.