I get a fair few pageviews from France and given the events of the last couple of days I would like to say to any French readers out there Vive la France.

Archea are a bizarre group of single celled micro-organisms. They are the basal group the the rest of the extant living things.In layman's terms, compared to archea we are close relatives of bacteria. As the basal living organism they have a wide variety of highly unusual (to us) properties and discoveries of new archea often redefine life as we know it. This bizarre group if often placed in its own category at a level above kingdom which we label Domain. Within it there are several bizarre branches of life which could have become the dominant forms of life on Earth but didn't. If you are a sci-fi writer looking for inspiration start here. This is the first of many archea I will include on this blog.

Description:
Haloquadratum is a genus of archea with the common name of salt squares. You can guess at where part of this name comes from when you look at this picture. 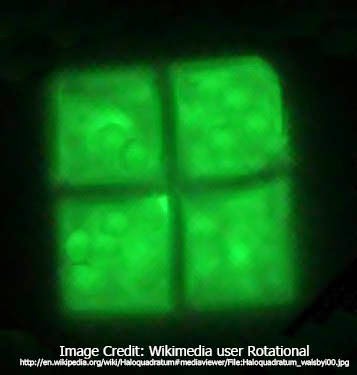 That's right their cells are perfectly square with sharp edges. Their ridiculously geometric cells often join together to form narrow fragile sheets. One can't help imagining that this is a possible precursor to a multicellular state. Their rigid cells contain several structures filled with gasses that give them th buoyancy necessary for living on the water's surface.

Like other members of their family Haloquadratum draw their energy from sunlight through a process entirety unrelated to plant photosynthesis. They use a protein called Bacteriorhodopsin as a light powered proton pump as their energy source. They live in salty water, and I mean very salty water. Their cell structure has been so heavily modified to live on a hyper-saline environment that if the water they are in is not at least near saturation they will not survive.

Distribution:
Haloquadratum is found in hypersaline waters all over the world.

Classification:
Take my advice and don't even go near the world of Archean Classification. Those who go in there never return. This was unquestioningly copied from Wikipedia.
Kingdom: Archaea
Phylum: Euryarchaeota
Class: Halobacteria
Order: Halobacteriales
Family: Halobacteriaceae
Genus: Haloquadratum