Mucus monsters
Description:
Today's creature is a family in our phylum chordata and have a spinal chord but they don't have a vertebral column.  It is a family called Myxinidae but it is commonly known as the hagfish. They are sometimes called slime eels, but I don't like that name as it confuses their phylogeny position as true eels are bony fish. 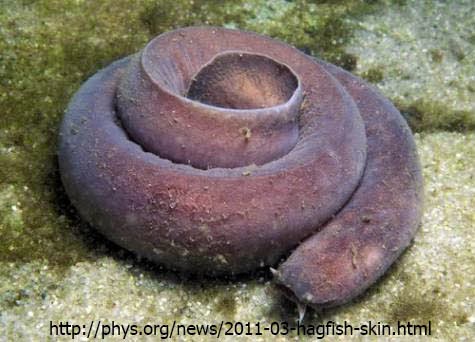 Hagfish are scavengers and live of various benthic invertebrates and carcass of dead vertebrates. They are notorious for their nasty habit of taking up residence in rotting carcasses and eating them from the inside out. They have a skull, but no jaws, which necessarily makes stripping the flesh off a rotting carcass a little complicated. The hagfish, however, have made stripping flesh of a rotten carcass unnecessarily very complicated. They tie their body in a knot around a part of the carcass they can grab hold of. This combined with sudden movements assists them in separating bite sized chunks of delicious rotten fish from a carcass. 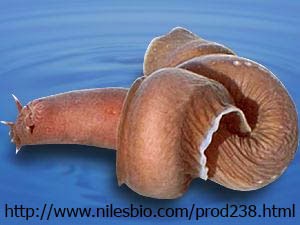 Interestingly enough they also use a know to free themselves when they get captured by a predator, but in this case they are assisted by the copious amount of mucus they produce. The hagfish have dozens of holes along the side of its body which enable it to excrete over a liter of mucus in a second. When they are threatened they produce copious amounts of mucus, which confuses predators, sometimes clogging their gills and makes everything much slipperier aiding in their escape. The knot trick is used if they are captured despite the confusion. Hagfish mucus is actually very interesting in itself, at least as far a mucus goes. It contains tiny threads of microfibers which despite being only 12 nanometers in length are 10 times stronger than nylon. There has been a lot of speculation as to what practical application this material might have.
Hagfish are eaten in East Asian cuisine, and often they are called eels. That's right, you may have eaten them at some point. 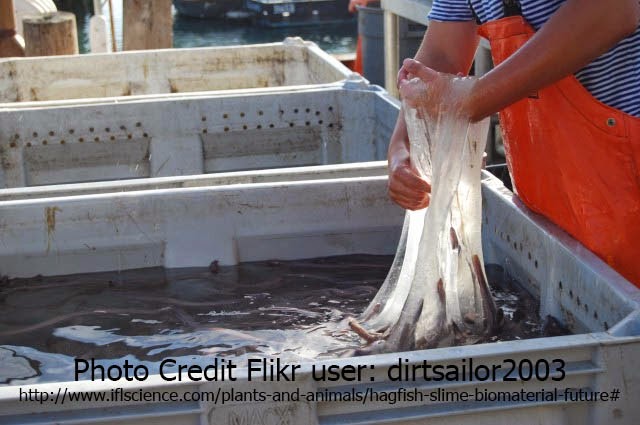 Distribution:
Hagfish live on ocean floors across the world, they prefer habitats with muddy benthos and can live up to several hundred meters below the ocean's surface.

Classification:
Hagfish are in a subphylum called Craniata as opposed to the Vertebrata which contains most of the chordate species including us. There is some debate as to their exact phylogeny position but I consider it likely that they are the closest relative of the Vertebrata
Kingdom:Animalia
Phylum:Chordata
Class: Pteraspidomorphi
Order: Myxiniformes
Family: Myxinidae