A crustacean that grows its food on its own body

Description:
Kiwa hirsuta, commonly called  the Yeti crab or the furry lobster, is a recently (2005) discovered deep ocean crab which lives in Antarctic hydrothermal vents. They are usually lack pigment over their body and in their eyes which are greatly reduced to the extent that it seems that they may be completely blind. These are common adaptation in stygofauna rather than in deep ocean animals. They get their common name from the long fine setae which densely cover their underside and their legs. 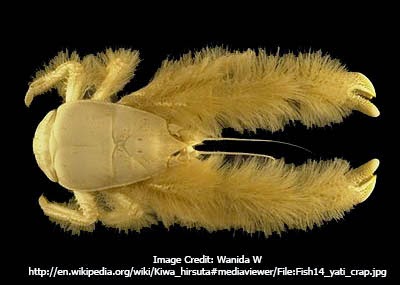 A second species, K. puravida was described in 2011, this time found in hydrothermal vents off the coast of Costa Rica. Both species feed off the bacteria that derive their energy from the heat around the hydrothermal vents. The thermophilic bacteria will be discussed in later posts. The using their long setae to trap them as they are taken with the currents. Their long fine setae capture the bacteria and provide an environment in which bacteria colonies can thrive. The yeti crabs then harvest these colonies for food. 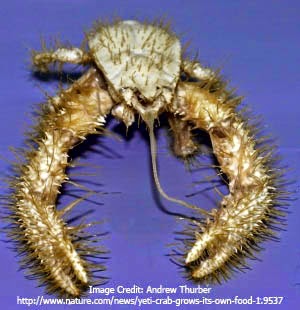 They tend to gather in swarms around the bacteria rich areas close to the opening of the hydrothermal vents. 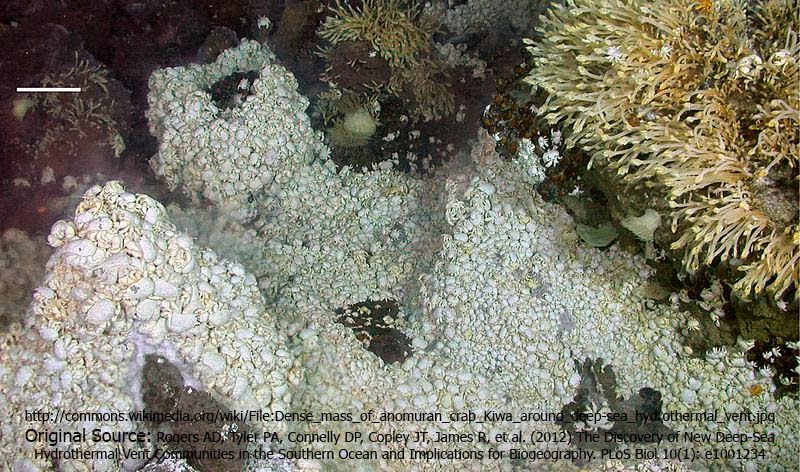 Distribution:
The Kiwa is only known from the hydrothermal vents on the Pacific Antarctic ridge and off the coast of Costa Rica, however there has been very reasonable speculation that there may be more species inhabiting hydrothermal vents of the deep ocean across the globe.

Classification:
The yeti crabs have their own family and technically speaking are neither a crab nor a lobster. They are in the Decapod order, a group which included the crabs, lobsters, hermit crabs, shrimp etc...
Also note here that the class Malacostraca is used instead of the old class Crustecea because recent phylogenetic analyses have suggested that the class Crustecea is paraphyletic or possibly polyphyletic. This last point is aimed more at the botanists, Herpetologists and Ornithologists who refuse to give up on classifications which they know are archaic.