A slug so tough it eats poison for breakfast
Today I am finally introducing the first of several species from one of the most spectacular looking groups in the animal kingdom: the Nudibranches, commonly known as the sea slug. The common name doesn't conjure images of anything quite so spectacular as they are.

Description:
Today's species is Glaucus atlanticus, a species with many common names. 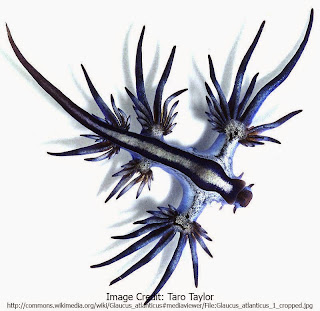 This spectacular looking Nudibranch feed on other animals on the oceans surface. It floats on the surface tension of the open ocean upside down. It maintains its position by swallowing air and storing it to reduce its density. It feeds of various Cnidarians and will even eat their stinging cells and recycle them for their own defense. The long thing tentacle like spines you see are used to store the cnidocytes (stinging cells). This makes it a rather unappealing meal for the numerous predators which feed off animals on the oceans surface. 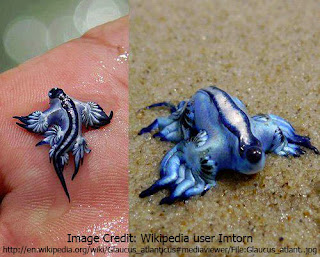 Distribution:
The sea slug is known in substation numbers from a few disjunct areas (off the East of South Africa, West of Europe and East coast of Australia). There are also various sitting records from various places across the world, which leads me to believe they are probably very widespread and possibly all over the world's ocean.

Classification:
The nudibranches are in the snail-slug group Gastropoda, but to answer the question as to whether they are true slugs is complex. In truth the terms snail and slug are biologically useless as they don't describe monophyletic groups.