One of the weirdest Australian native mammals

The Tachyglossidae, commonly known as the echidna is a family of monotremes comprised of 2 to 4 species, depending on who you ask. They are also all but one of the species of monotremes which still exist, the other being the platypus which we will discuss in a later post. Monotremes are a nearly extict family of egg laying mammals. Some people mistakenly assume they are related to marsupials due to their distribution, but morphology and molecules both strongly agree that marsupials are more closely related to placental mammals (us).
Monotremes are an ancient lineage which broke off from the rest of the mammals during the Triassic. They don't possess nipples although they do possess mammary glands and lactate in order to feed their young. it is interesting to note that although monotremes young are hatched from eggs they still derive a large part of their immune system from their mother's milk.
Description:
Echidnas are insectivorous and specialize in eating ants.The name Tachyglossidae means sticky tongue, as they have a long sticky tongue similar to anteaters (analogous only).  The common name echidna comes from the ancient Greek mythological creature of the same name who was considered to be the mother of all monsters. She was half snake and half woman. The inspiration of the name comes from the fact that monotremes retain several ancestral characteristics which have been lost in other mammals such as egg laying, the way it's legs are attached to the hips and the way structure of the ear. There is definitely something lizardesque about the way an echidna walks.


The next two photos are my own work, you can you them in whatever way you want for whatever purpose you want, without conditions. If you do use them, I consider it good manners to include a link to this site. 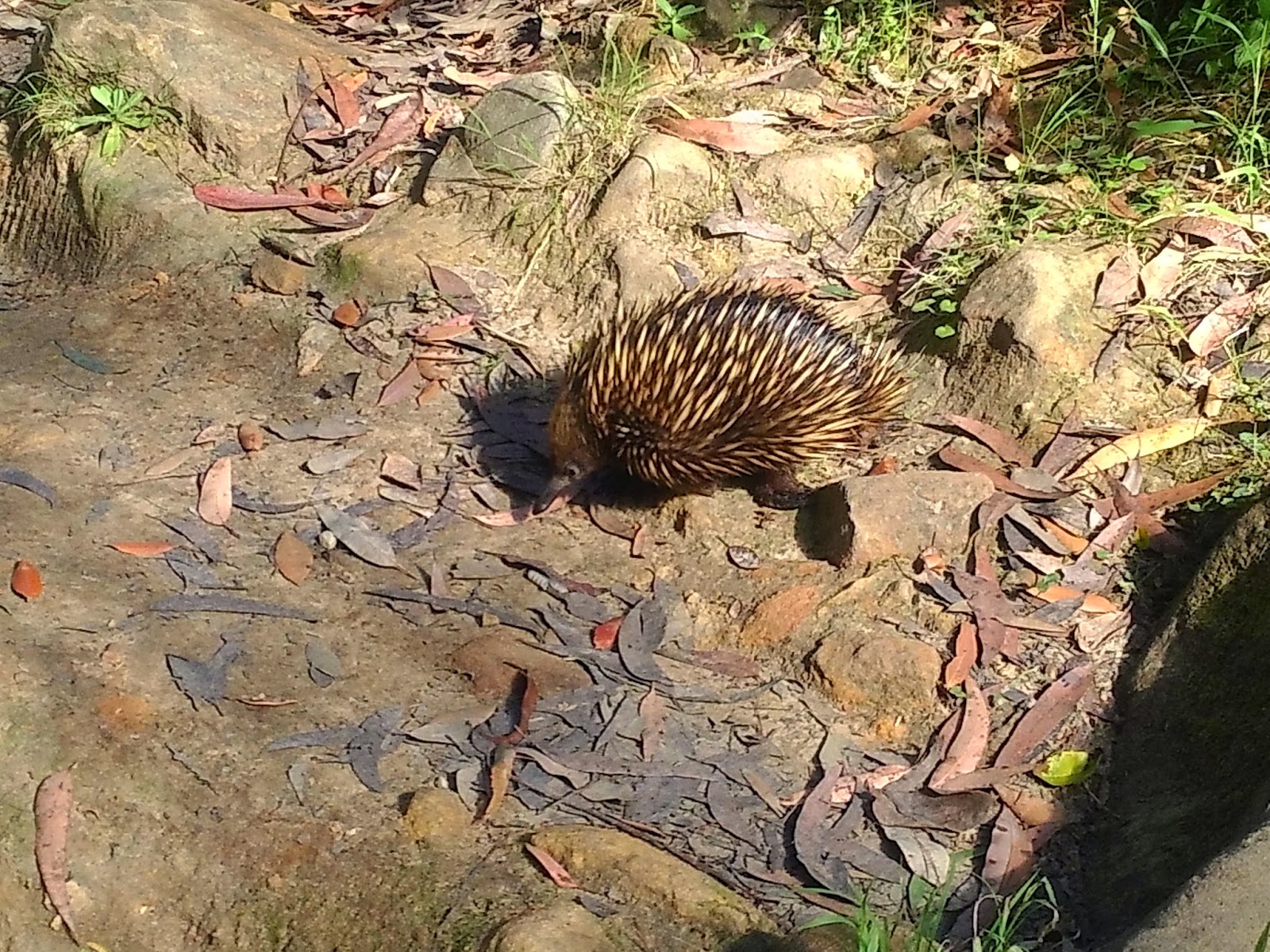 Echidnas possess large spines on their back which are used for protection. When they feel threatened by people trying to take photos of them they curl up into a ball and present their spines as a defense. 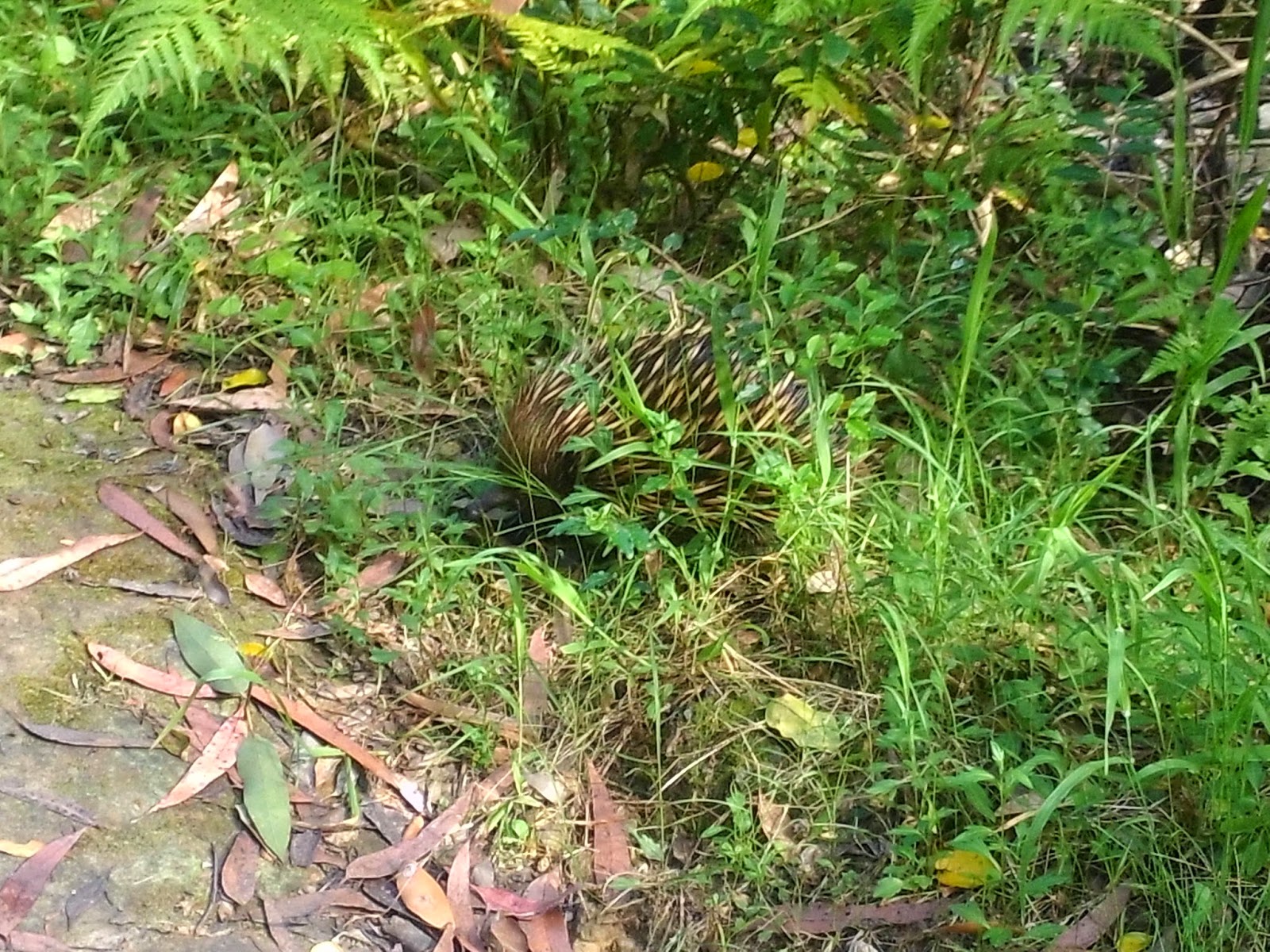 The males posses a specialized spine on their foot that seems to be a characteristic of monotremes.  In echidnas the spine does not harden or contain toxins as it does in the platypus. It is believed that it is used to excrete pheromones. 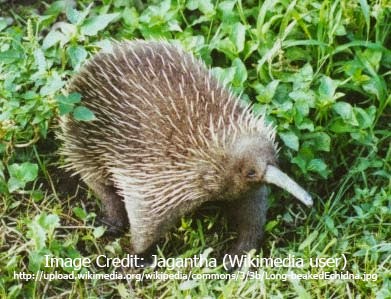 A common fact which Australians love to tell tourists is that echidnas have a four headed phallus. If you don't know what a phallus is, you can look it up, I don't want my blog to be blocked by parental controls. Two of these are used for mating and not for urinating, however only one head is used at a time. The other two are presumably both for urination. Marsupials also have their urinary and reproductive functions separated which suggests that having them fused is a derived condition in placental mammals.
The echidna's 'beak' contains electroreceptors, albeit far fewer than their relatives the platypus. This is unusual because elctroreception has only been proven to exist in aquatic or amphibious organisms, although it is thought to exist in the star nosed mole.
Distribution:
Echidnas are endemic to Australia and New Guinea.

Classification:
There are two extant genera of echidna, Tachyglossis and Zaglossus,which are the short beaked and long beaked echidna respectively. I was taught that both of these genera are monotypic, however according to Wikipedia there are three species of long beaked echidna. I'm not going to pretend to understand the nuances of the case for these species, so I won't comment any further. There are also extinct echidnas in the fossil record