A weird looking member of a weird group

A strange looking sea cucumber today. Sea Cucumbers belong to the echinoderm phylum, a diverse phylum which includes starfish, sea urchins, sand dollars and sea lillies. Many members of this phylum will be included later. Echinoderms are in the bilateria radiation of Animals, the group I like to call the 'worm' group. It includes bilaterally symmetrical animals (rough definition). Bilateria normally foolow a two point symmetrical body plan. Echinoderms usually have 5 point symmetry, a fact which is most obvious in starfish but even in sea urchins and sea cucumbers internal arrangements follow a 5 point symmetry body plan. Sea cucumbers may look a bit like bloated slugs but within the bilateria Echinoderms are closely related to our phylum (chordata) than they are to the slug phylum (mollusca). They usually have an internal system of hydaulic pumps which facilitate their movement. Sea cucumbers don't have a brain but instead have a ring of nerves around their mouth which branches out in 5 chords.

Description:
Parastichopus johnsoni or Johnson's sea cucumber is a benthic animal and which has a very limited ability to swim. 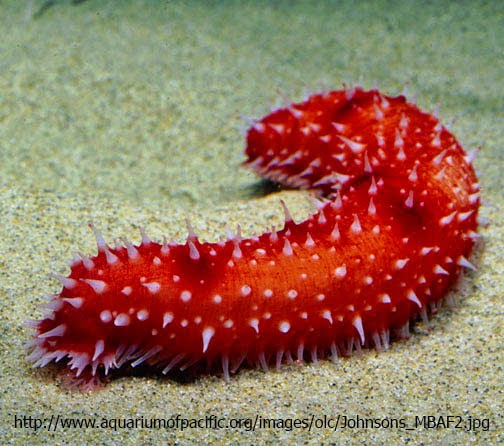 They feed by scooping up ocean floor sediment and filtering out bits of organic waste that have from the pelagic zone. Their mouth is covered with tiny tentacles and cilia for the job. 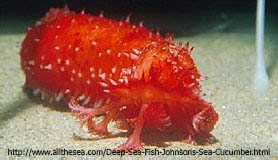 They earn their place on my blog because of their bright orange coloration with pale white spikes giving it an alien-like appearance. Like other sea cucumbers, Johnson's sea cucumber can eviscerate itself when threatened. If you are wondering "what do you mean eviscerate?" I assure you it is exactly what it sounds like. It spew out its internal organs which stick to the predator. The predator will naturally go for the internal organs and leave the sea cucumber to get away unharmed........ relatively. Yes Sea cucumbers can grow their internal organs back. That's a pretty cool trick.

Distribution:
Sea cucumbers live on the ocean floor from 100m to 650m below sea level in the North East Pacific Ocean.