The naked molerat... and that's being nice.
Description:
Heterocephalus glaber is commonly known as the naked molerat, and if you think that this name rather unflattering, take a look at it: 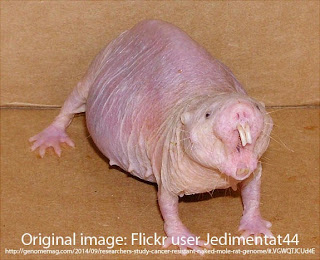 Those incredibly large teeth are not only capable of moving around, but can move independently of one another and are predominantly used for tunnelling. Those long scrawny whiskers are used to feel their way around their tunnels as light is limited and their eyesight is poor. 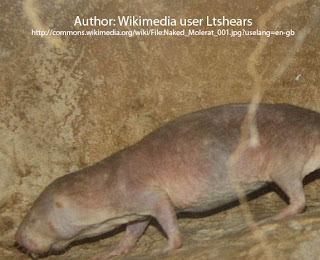 Not only is this one of the ugliest mammals alive, but has a very unusual social structure. They live underground, usually in colonies of a few dozen but can contain up to a few hundred. Colonies have one queen, the only reproductively active female, and a few reproductively active males. The rest of the colony is made up of sterile worker or soldier drones. The queen produced pheromones to stop other females from becoming reproductively active queens, once a queen dies the females compete to become the new queen. 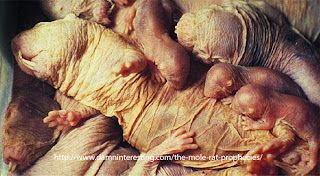 This is one of the very few examples of eusociality outside of the insects.
One can hardly mention naked molerats without pointing out the fact that they don't feel pain when they come in contact with acid. This is said to be an adaptation to living in high carbon dioxide environments. They are very long lived (up to 31 years) and they seem to have a resistance to cancer.

Distribution:
The naked molerat is endemic to the horn of Africa.