Description: Today’s animal is the hideous looking deep sea fish Melanocetidae, commonly known as the clack sea devils, which are a type of deep sea angler fish. They are famous for its unusual strategy of luring in its prey with a small light producing structure attached to {an outgrowth of their spine}. The end of this structure contains bioluminescent bacteria, which produce the glow that entices their prey. The angler fish will lure them in and then, well with teeth like that you can imagine what will happen. 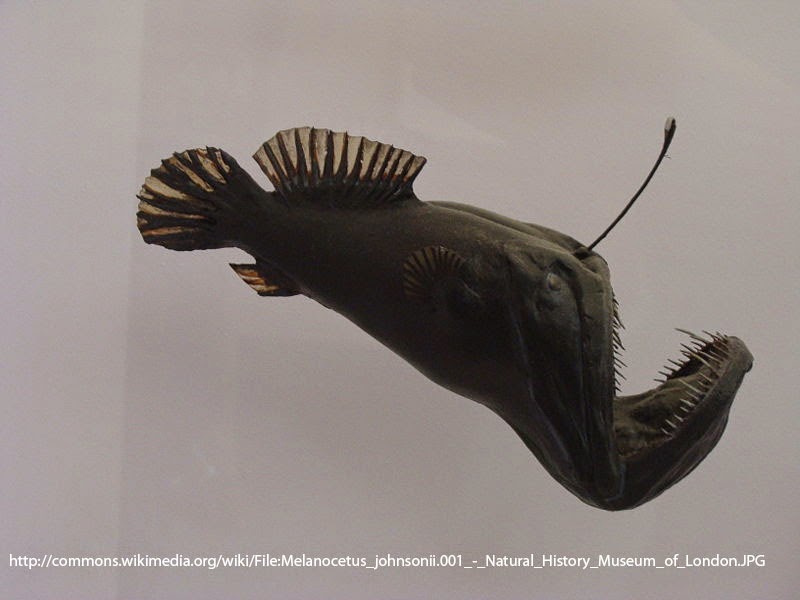 Most people have heard of the angler fish at least from finding nemo and have heard all that stuff about the bioluminescent bacteria, but what is less often mentioned is that this is only the female. Male angler fish are much smaller than the females, often 10 times smaller or more. They exhibit a rare life history strategy known as sexual parasitism. This is one of the most bizarre examples of parasitism in the animal kingdom. When they reach sexual maturity they latch on to a female and eventually burrow under her scales. They then parasitise the female for the rest of their life while fusing their circulatory systems together. Most of the body of the male fish is further reduced once it has becomes attached to a female, except the testicles which expand, providing the female with a means of fertilizing her eggs. In fact the male anglar fish Photocorynus spiniceps (Family Lynophrynidae) is said to be the smallest fish in the world. Some females can have up to 6 males living off them. I guess this behaviour is a product of the fact that members of the same species are hard to come by in the aphotic zones of the ocean, so when you find them, you latch on. 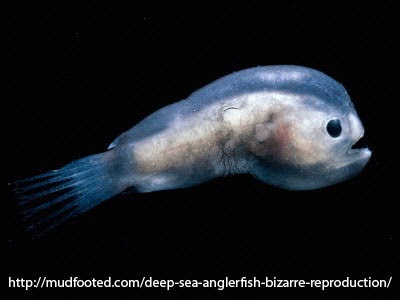 They can catch prey which is larger than themselves and stretch their body more than twice its original size to accommodate them, probably due to the scarcity of food in the aphotic zone. 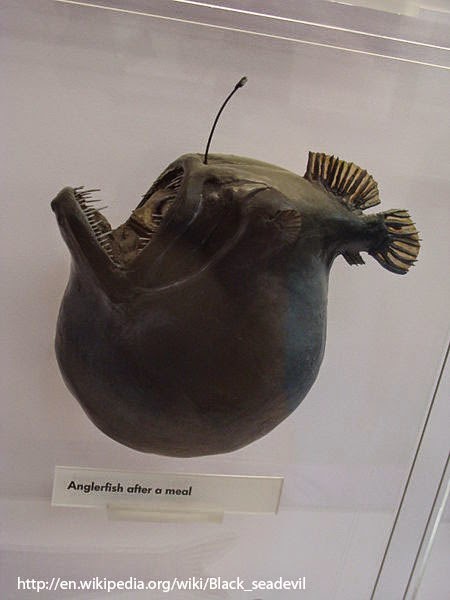 Distribution:
Melanocetidae are found in all the world's oceans, but only in the mesopelagic, bathyalpelagic and higher up in the abyssalpelagic zones of the ocean.

Classification:
Actually the term angler fish can apply to any member of the Order Lophiiformes, and not all of them live in the deep ocean. I decided that the Melanocetidae had the meanest looking appearance out of the Anglerfish families. The family contains only a single known genus; Melanocetus.