A beetle which boils it's predators alive.
Description:
Brachininae are a Carabid subfamily which is commonly known as a Bombadier beetle, however they are not the only carabid beetles to carry this name as discusses in the classification. 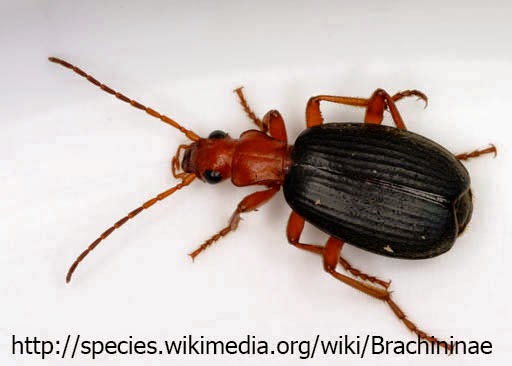 They bay not look too bizarre but they have a really cool defensive mechanism. They store two chemicals in their body, Hydrogen peroxide and Hydroquinone. These two chemicals react when mixed together. When they feel threatened they mix them together in a special chamber with a bit of water. The walls of this chamber are covered in cells which rapidly produce a catalyst which when mixed with the other two chemicals causes an explosion. Literally. This explosion is audible to the human ear and causes the liquid to heat up to nearly 100 Celsius.  Meanwhile the pressure in the chamber increases due to the release of gasses from the explosion and the boiling liquid and stinking gases are released. All this happens within a second. Bombardier beetles have directional control of the liquid spray. The spray can be lethal to other small animals including some of their predators.
Brachininae are carnivorous beetles and hunt mostly at night. Some species tend to congregate while hiding during the day. 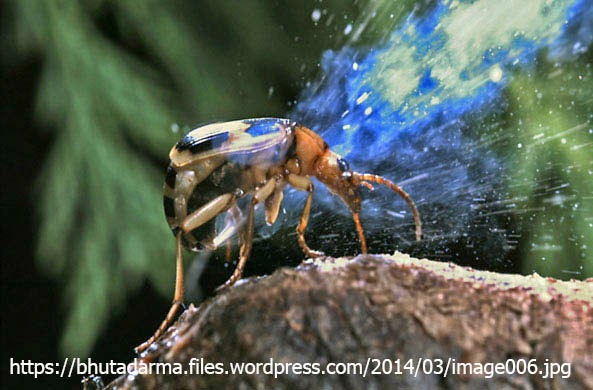 Distribution:
Brachininae are a cosmopolitan subfamily.

Classification:
There are other carabid beetle which use the same defensive mechanism which are also called Bombardier beetles in the common tongue. They are in the family Pauchinae. They probably form a paraphyletic group with the Brachininae. I would consider this to be too complicated to have evolved the same way twice.
Kingdom: Animalia
Phylum: Arthropoda
Class: Insecta
Order: Coleoptera
Family: Carabidae