A glowing cockroach that lives on a volcano

Description:
Lucihormetica luckae is a cockroach, but unlike most cockroaches this one can glow in the dark: 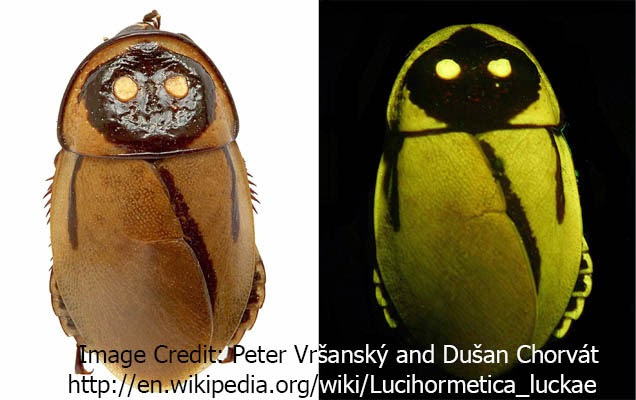 I'm sure you are aware that most cockroaches hate light, they hide in holes and under tour floorboards during the day and scurry for cover when you flick the lights on at night. So why would they want to produce light of their own? Their is a type of click beetle known as Pyrophorus which lives in the same area as Lucihormetica luckae. It is poisonous and nocturnal and also glows in the dark. The wavelength of light given off by our cockroach and the click beetle are the same. This has led us to believe that the cockroach is mimicking the click beetle. Lucihormetica luckae was first described in 2012 although specimens are much older that that. They may be extinct as discussed below.

Distribution:
Lucihormetica luckae is only known from the Ecuadorian volcano Tungurahua. It is possibly extinct as no specimens have been found since the last major eruption of the volcano in 2010. It is not a good idea to jump to conclusion though official because sightings of most insect species are few and far between and 5 years without a sighting is a long was from assuming the worst.