A parasitic plant worthy of sci-fi. 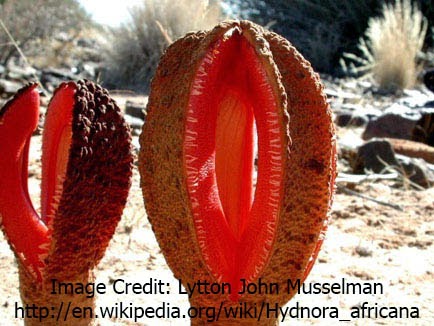 The plant lives underground for the majority of their lives. They don't photosynthesize and they don't produce chlorophyll and they rely entirely on other plants for their own energy. The plant sends out roots which attach themselves to the roots of another plant. They have specifically evolved to target plant species in the genus Euphorbia. They have evolved an acid which wears away the outer layers of the roots and steal the nutrients from the roots of other plants. When it rains heavily, the plant grows flowers from the roots. Their fruit also grows underground and is eaten by animals which disperse the seeds through their feces. The fruits can contain up to 20,000 seeds each. 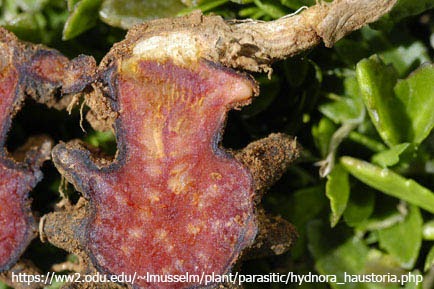 Hydnora africana is mostly pollinated by carrion beetles which feed off decomposing bodies.  As a result they give off a chemical which mimics the smell of rotting ruminate mammals.  This strategy is unusually common in parasitic plants. Cultivated plants usually take around 5-6 years before they produce flowers. 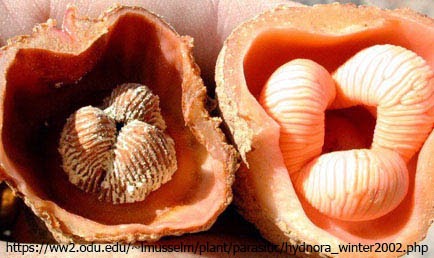 Distribution:
Hydnora africana is native to southern Africa, particularly in the Arid regions.

Classification:
The Magnoliid clade are one of the basal Angiosperm clades which branch off before the Monocotyledons split from the core Eudicots. The Order Piperales includes the commonly known plante genus Piper (peppers).