Worms that eat through bones

Description:
Osedax is a recently discovered (2004) genus of polychaete worms that have already aquired several common names such as bone worms, bone eating worms, whale worms and zombie worms. Osedax in latin means bone eating, so you can probably guess where this is going. Osedax get their name from their habit of eating the bones in whale carcasses. They burrow through the exterior of the bone but it is the marrow that they are really interested in. 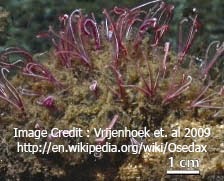 Not only do they manage to chomp up whale bones but they do it all without a mouth gut or eyes.  They dissolve the bone away with acid and rely on a symbiotic relationship with bacteria to convert the whale's marrow into usable food. They use the feather-like protrusion as a sort of gill.

Distribution:
Osedax are found in all the world's oceans.