Cuddly carnivores
Description:
Thylarctos plummetus is an Australian Marsupial commonly referred to as a drop bear: 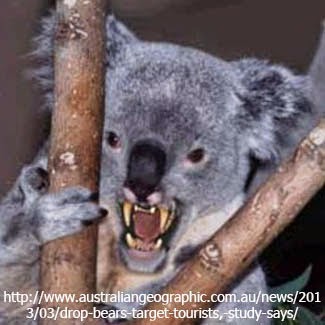 They weigh about 120 kg and grow to about 130 cm  in length. They are large predatory marsupials whose closest living relative is the Koala, and like Koalas they are found almost exclusively in Eucalyptus trees. Unlike their Eucalyptus feeding cousins, they are carnivorous and have a rather unique hunting strategy. They are ambush predators, and like the Koala they wait around in their tree for a long time. While they are waiting, their metabolic rate reduces dramatically. Their fur is modified to camouflage particularly well in the particular blue-green tint of Eucalyptus trees. When an unwitting prey item wanders underneath the tree in search of a rest in the shade this ferocious predator will drop from the branches above. The shock of the impact of the heavy animal will often stun or knock out their prey at which point they use their fangs to puncture the arteries in the neck, killing their prey before it recovers. They will then slowly devour their prey. If the prey is large they will return to their tree and sleep while they digest their meal and then return to the ground to finish off what is left. It is believed this behavior led to the possibility of evolving into a low energy diet such as that of a Koala. It is also believed that the scarcity of prey in the sparse, dry Australian Eucalyptus forests led to the necessity of evolving to exploit an alternative, more abundant food source, namely Eucalyptus leaves. Drop bear will occasionally attack humans and there are a few accounts of survivors of such attacks however we are unsure how common fatal attacks are as drop bears will not leave any remains after a few days of feeding and they usually so not attack groups, but only individuals on their own. 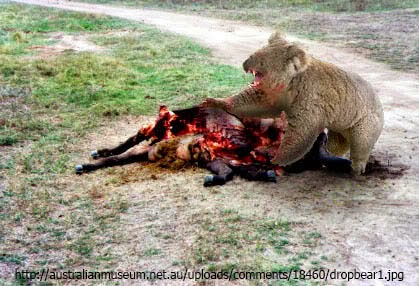 There are many urban legends as to what attracts or repels drop bears such as Vegemite, urine and Australian accents. Most if not all of these are probably false, however many people still take such precautions in areas with a high risk of drop bear attack, just in case. It is statistically more likely that tourists will be attacked by drop bears than Australian, but this is probably due to the fact that tourists are unaware of the dangers and if they see a drop bear they will be more likely to confuse it for a Koala and try to get close for a good look. Photos of Drop bears are rare as people tend to keep moving in drop bear infested areas which greatly reduces the chance of attack.

Classification:
Drop bears are not true bears, but are marsupials. While their closest living relative is the koala and the external appearance is fairly similar the two species are more different than a first glance would reveal. The drop bear has a lot more muscle mass, a much simpler digestive tract and and a much more highly developed brain than a Koala.
It is a subject of much controversy as to whether the most recent ancestors of Koalas and drop bears are carnivorous or herbivorous. I tend to favor the carnivorous hypothesis. The Koala's morphology shows evidence of simplification in the brain and in certain muscles it is believed that the koala may have evolved from a carnivorous ancestor rather than a herbivorous one. It seems fairly likely that Koalas have fairly recently evolved to become accustomed to a Eucalyptus diet and that is why they are not born with the stomach bacteria necessary to digest Eucalyptus leaves, but need to eat their mother's feces early on in life to acquire the appropriate gut microbes.