Gavialis gangeticus is a crocodilian species which is commonly known as a gharial. 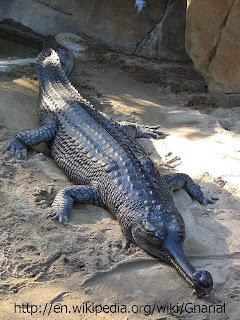 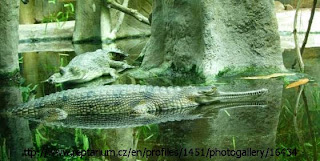 Crocodilians are usually pretty scary, especially when they are 6 m long, but these gentle giants are not interested in eating you. They live on a diet consisting entirely of fish. Their jaws have been modified to be thin and narrow with lots of little needle-like teeth. They are incapable of raising their body off the ground while on dry land and can only move around on land by 'belly sliding' with their legs providing propulsion.

Distribution:
The gharail used to be found in river systems throughout the Indian subcontinent but their range is now limited to parts of Northern India, Pakistan, Bangladesh and Myanmar