Bagheera kiplingi is a salticid (jumping spider) which as far as I know doesn't have a common name. I like to call it the hippie spider for reasons which will become clear soon. 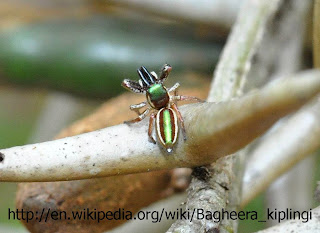 A lot of people find spiders to be creepy even though they look really cool and are mostly harmless to humans. To be fair to all those who get creeped out by spiders, they are creatures who as a rule like to ambush and entrap other animals, subduing them with sticky silk and venom. Once subdued they slowly digest their prey alive and suck the partially digested body fluids out with massive fangs. That is sort of creepy. Bagheera kiplingi, however does not follow rules.  These little nonconformists feed off the Beltian bodies of plants, which are intended to be enticements for ants to protect the plant from herbivorous insects. As jumping spiders they posses the agility to evade the hordes of ants protecting their food source and snatch up the occasional meal.