Bloodless fish
Chaenocephalus aceratus is a type of antarctic ice fish, a group that dominates the freezing waters off the coast of Antarctica. 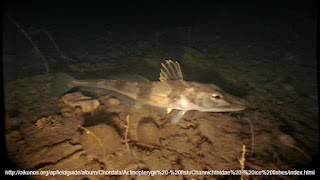 All members of this group have to be fairly well adapted for the cold and you would think that they would have to be fairly warm blooded fish. Chaenocephalus aceratus is more of a no blooded fish. It is the only vertebrate to have lost its blood. It still has a sort of translucent liquid made of of plasma pumping through its veins, but it has no blood cells and not even haemoglobin is present. Haemoglobin is the molecule vertebrates use to carry Oxygen around the body. Plasma can carry a limited amount of Oxygen, but it is only 10% as efficient.  To make up for this Chaenocephalus aceratus has an enormous heart and a higher volume of blood. This raises the question as to why they would loose rid of their blood. It doesn't give them an advantage in surviving the cold. I can't really answer that convincingly.

Distribution:
Chaenocephalus aceratus is known from a southern ocean island called Bouvet Island and from the waters around the Antarctic peninsula.