Polypodium hydriforme is a freshwater animal in the jellyfish group (Cnidaria) although this classification is not universally accepted. 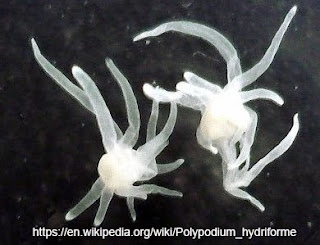 There are not many cnidarian parasites, which makes it sort of interesting in itself. What is even more interesting is that it is one of the only animals which is an endocellular parasite, meaning it lives inside the cells of other organisms. They infect fish eggs where they live most of their life.
While inside the fish eggs they go through many fairly normal Cnidarian stages of their lifecycle, except they are inside out. What do I mean? Their gastrointestinal wall is on the outside while their epidermal cells 'skin' is on the inside. They slowly digest the nutrients inside the fish eggs and eventually emerge. Once they emerge they start to bud and quickly form a Medusa body plan like what you would think of normally in a jellyfish. In this stage of their life cycle they can reproduce sexually and infect new fish.

Distribution:
Polypodium hydriforme can be found in North America, Europe and Northern Asia.

Classification:
Polypodium hydriforme is so weird it has its own genus and family and even class. It has not been allocated an order as there is really no point. Their position within the Cnidaria is not universally accepted as some zoologists place it closer to bilateria (if you're not familiar with bilateria think of them as mainstream animals. Insects, mammals, snails, earthworms etc...). They posses the stimging cells which are characteristic of the Phylum Cnidaria and the methods which I favor place them in the Cnidaria, but some other methods contradict this placement.
Kingdom: Animalia
Phylum: Cnidaria
Class: Polypodiozoa
Order: see above
Family: Polypodiidae
Genus: Polypodium
Species: Polypodium hydriforme