Acherontia is a genus of moths which are commonly known as the Death's-head Hawkmoth. 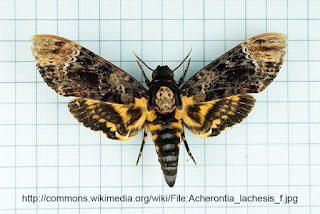 The common name has something to do with the skull like marking on the pronotum. This marking varies between species and is more convincing in some species over others. The species Acherontia atropos is the fastest moth in the world, reaching speeds of nearly 50 kilometers per hour. Death's-Head Hawkmoths have an unusual habit of lodging themselves in bee hives and gorging themselves on honey. They achieve this by mimicking worker bee pheromones. The markings on their back are also suspected to be mimicking a bee's face. They also make a squeaking noise which is believed to mimic the noise worker bees make: 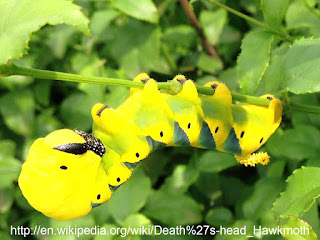 Distribution:
The genus is found across Europe and Asia.