The biggest animal, ever!

Balaenoptera musculus is commonly known as the blue whale, and you have probably heard of it. 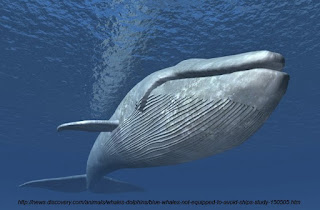 It is the biggest animal alive, both in length and in mass. While there are fossils of animals which were longer according to our best estimates it has the largest mass of any animal ever. Most people think that animals used to be bigger once upon a time, and on land that is probably true, however blue whale contradicts this rule. They can reach 30 meters in length and weigh up to 180 tonnes.

A lot is known about this enourmous animal as they have been studied a lot. The most amazing thing to me is that such a large animal feeds mostly on a tiny crustecean known as krill.

Distribution:
While they are very rare, Blue whales can potentially be seen anywhere in the world's oceans, but not in shallow seas. They are migratory and cannot be seen in any ocean all the time. They are not usually seen close to the coast.